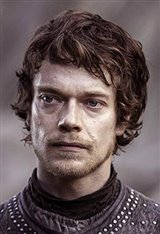 Born in London, Alfie Allen is the son of film producer Alison Owen and actor Keith Allen and the brother of singer Lily Allen, who wrote the song "Alfie" about him. His uncle Kevin Allen is a film director, screenwriter and producer.  Alfie is best known for his role as Theon Greyjoy on the HBO hit series Game of Thrones, for which he received an Emmy nomination in 2019.   He has also appeared in movies such as Atonement (2007), John Wick (2014) and Jojo Rabbit (2019). See All