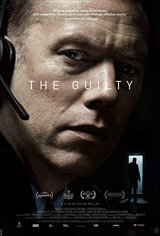 Originally titled Den skyldige, this Danish film tells the story of former police officer Asger Holm (Jakob Cedergren), who's now a cynical alarm dispatcher. He answers a cryptic emergency call from a woman on a mobile phone. Asger can see on his computer display that the phone belongs to someone named Iben Ostergard and that she is calling from a moving car. He can also hear a man speaking in the background and asks if the man knows who she's talking to. She replies, "No." He then asks the woman if she's been abducted. She replies, "Yes."

The line suddenly goes dead. Asger dials the number and a man answers, who tells him to "keep out of it." When he determines that Iben has been kidnapped by her volatile ex-husband, leaving two young children at home, the search for the woman and her kidnapper begins. With the phone as his only tool, Asger enters a race against time to save the endangered woman. But he soon realizes he's dealing with a crime that is far bigger than he first thought.