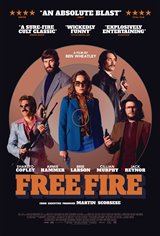 Set in Boston in 1978, Justine (Brie Larson) has brokered a meeting in a deserted warehouse between two Irishmen (Cillian Murphy, Michael Smiley) and a gang led by Vernon (Sharlto Copley) and Ord (Armie Hammer). What begins as a transaction of guns ends up an arms deal gone wrong, when shots are fired in the handover.

With one side not wanting to take the guns they think were mistakenly ordered and the other still wanting the cash they’re owed, the separate groups are forced to band together in a heart-stopping (and sometimes hilarious) game of survival.