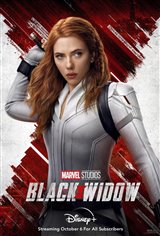 Natasha Romanoff a.k.a. Black Widow (Scarlett Johansson) has lived a lot of lives before her time as an Avenger. Following the events in Captain America: Civil War, Natasha is still on the run for helping Steve Rogers, a.k.a. Captain America (Chris Evans), escape from the U.S. government.

Struggling with her past mistakes of choosing between who the world wants her to be and who she really is, Natasha's dark history as an operative for the KGB finally catches up to her. Now being hunted down by the government that turned her into the Black Widow, Natasha decides to stop running from her past, and heads to Budapest, where she reconnects with her "sisters," fellow Widows Yelena (Florence Pugh), Melina (Rachel Weisz), and their father figure, Red Guardian (David Harbour). While revisiting her past and fixing broken relationships, Natasha's former bosses send a new agent, Taskmaster, to pursue her and bring her back "home."