Army of the Dead (Netflix) 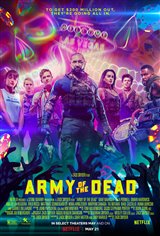 The world is still recovering from a zombie outbreak, leaving Las Vegas quarantined and walled off from the rest of the world. Scott Ward (Dave Bautista), a former zombie hero, is now working at a small town diner flipping burgers. One day he's approached by a man (Hiroyuki Sanada) who offers him an opportunity to make $50 million, telling him that there is $200 million sitting beneath Las Vegas in a vault, just waiting to be taken before the government nukes the entire strip. Scott puts together a team of zombie-killing veterans to pull off the heist, but upon their arrival within the walls, they realize their mission has become much more complicated.

They are met by mutated Alpha zombies, who are smarter, faster, and have also seemed to have formed their own zombie society within the walls. In a race against time, Scott and his crew gamble their lives, as they must also battle against hordes of Alpha zombies, leaving the $200 million to be taken only by those who survive.