Published By Alexandra Heilbron on Jul 12, 2021

Renowned Hollywood director Eli Roth was destined to make Fin -- a film that gets to the bottom of the shark fin trade and why over 100 million sharks disappear from the oceans each year.

That's because as a child, he loved horror movies, but the one that frightened him the most was the 1975 movie Jaws. Not only did it give him an irrational fear of sharks, but he was also fascinated by them. When he was asked to host the talk show Shark After Dark in 2015 for Discovery Channel, he jumped at the chance. He was also invited to go on a shark dive, something he’d wanted to do his whole life.

It changed everything for him. Underwater, he discovered how gentle and innocent sharks are -- and he immediately fell in love with them. Curious, social, and sometimes shy, they swam up to him, but often kept right on going. He discovered that when he reached out a hand, some were so friendly that they allowed him to pet them.

In the film, he meets with shark fisherman, talks to marine biologists and members of conservation societies such as WildAid and Sea Shepherd to find out why and how these magnificent creatures are disappearing.

Roth shows that sharks are not monsters that want to eat us, as they’ve been depicted in movies. He wants to help change the conversation about these beautiful and majestic creatures. He decided to expose the truth about sharks and the oceans, no matter how uncomfortable or dangerous it would be for him.

Roth seems fearless as he insists on getting in the middle of some dangerous situations. He goes out on a fishing boat in Mexico and is horrified by what he witnesses. He travels to Hong Kong, where more than 50 percent of the world’s shark fins pass through on the way to China to be used in shark fin soup. And 25 percent of those are from sharks on endangered lists.

Interestingly, when he goes into stores that sell shark fins, they force him out of the store, then close their shutters and doors right on the spot.

The most dangerous situation is when he boards an illegal fishing ship filled with hostile fishermen who begin screaming at marine coast guards armed with AKs. As a Maritime security specialist turns to Roth and asks him to stick close to him, we realize the danger he could face if he wanders off and finds himself in the hands of the sailors.

Perhaps the most disheartening event for Roth is when he attends a shark tournament in New Bedford, Massachusetts, held by his fellow Americans. What occurs there is jaw dropping.

Roth is perfect as the protagonist of this film. He’s not a shark expert. Much of what he witnesses and learns is brand new to him, as it will be for many who watch this film. He’s alternately shocked and dismayed.

The film offers absolutely gorgeous shots of the ocean, showing sharks swimming peacefully through the water, which makes the scenes showing the atrocities happening to hundreds of thousands of sharks even more jarring.

There is good news, however. Roth visits a shark sanctuary in the Bahamas, where he learns that sharks are worth far more alive than dead. At this particular sanctuary, over the past 20 years they’ve generated over $800 million by changing from fishing sharks to shark tourism. He’s told that one live shark can generate $250,000 over its lifetime.

Joe Romeiro, who has been taking people shark diving for over 10 years, says it all when he tells Roth: “[Sharks are] one of those animals, man. So much tolerance for us. [People have] No tolerance for them.”

Fin is a fascinating, fast-paced movie with an important message. Warning: This film contains graphic images and footage of shark finning. It debuts July 13 on Discovery+. ~Alexandra Heilbron 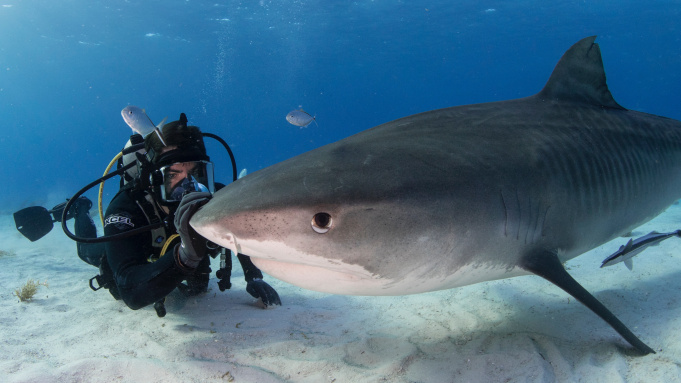