Published By Alexandra Heilbron on Sep 23, 2021

Dear Evan Hansen has a serious story to tell, but it’s also incredibly moving because it has an uplifting message. Ben Platt, who won a well-deserved Tony award when he originated the role on Broadway, reprises his role. He was 23 when he played Evan on Broadway, and was a few years older than that for filming, but it really doesn’t matter. He looks young and vulnerable as Evan and his incredible talent is what makes every bit of the film a treat for the senses when he’s on the screen, which is most of the time.

As the film opens, we are immediately introduced to Evan (the number "Anybody Have a Map," which set the scene in the stage version by introducing us to the relationship Evan has with his mother – as well as the relationship another key character, Connor, has with his family -- is gone), whose anxiety is such that he can’t even order a pizza for dinner because that means he would have to talk to the delivery person. He sees a therapist regularly to deal with his crippling insecurity, and is given an assignment to write himself a letter, in the form of a pep talk each day, beginning with “Dear Evan Hansen” — hence the title of the show.

At school, he’s ignored and/or bullied and is so awkward that even when Zoe Murphy (Kaitlyn Dever), whom he has a crush on, talks to him, he can’t come up with a response.

Zoe’s brother, Connor Murphy (Colton Ryan), has problems of his own. He has anger issues, struggles with depression and substance abuse and his history of self-destructive behavior has managed to turn off most people around him – like Evan, he has no friends.

Connor and Evan wind up in the same classroom just after Evan has printed out his letter to take to his therapist. As Evan is waiting for his paper to come out of the printer, Connor interrupts him, and talks to Evan in a friendly way, even signing his cast. That changes when Connor reaches for a paper from the printer and gets Evan’s instead. He sees Zoe’s name mentioned in the letter and thinks Evan set this up to upset him. Connor angrily takes the letter and leaves with it.

Ben Platt is joined on the screen by a number of Hollywood names — he’s the only original cast member to reprise his role and that’s a shame, because Rachel Bay Jones, who starred opposite Platt, also won a Tony for her role and would have been perfectly cast as his mother in the movie as well.

Although there are many emotional moments in Dear Evan Hansen (while watching it on stage I heard sniffles all around me from an early point in the show), it was the song “So Big / So Small” sung by Evan’s mother (played on screen by Julianne Moore) that finally brought tears to my eyes when I saw it on stage. I didn’t have the same reaction while watching it in the film.

Musical theatre is an art. Performers spend years studying it because there’s so much that goes into it. When you’re given a song to sing, not only do you need to know how to sing each word, each line (how softly, how much emphasis on each phrase), but you also need to know whether you’re singing it to yourself or to someone else.

“So Big / So Small” is for Evan’s benefit, to comfort him. The emphasis should be on the words that tell Evan he is loved, but Moore shows her singing inexperience as she throws away key words and phrases by almost whispering them, changing the song's meaning and intention. She seemed to be singing it to herself, rather than Evan. As a result, there wasn’t a sniffle to be heard from the audience during the song.

To be fair, this could also be partly due to the omission of an earlier song that was sung by Evan’s mother, “Good for You,” in which she expresses her frustration as a single mother. It set her second song up and without it, “So Big / So Small” doesn’t have quite the same impact.

Amy Adams turns in a complex performance as a mother trying to be strong for everyone around her as she tries not to crack under the enormous pressure of losing a child. Unfortunately, she gets very little singing time, so her vocal talent is wasted, when she would have been an excellent choice to play Evan’s mother.

Danny Pino as her husband Larry also turns in a strong performance, and it’s a shame that his character’s song “To Break in a Glove” was cut. The song and scene he has with Evan was one of the most poignant ones in the stage version and gave us a look at what this character is actually feeling. The song isn’t so much about breaking in a baseball glove, but having the patience to stick to a task even when it gets difficult. He’s talking about his son, Connor, and the struggles he had trying to raise such a difficult child.

It’s also interesting that Pino’s character was turned into a stepfather -- he’s no longer Connor’s birth father. For Evan, his father’s neglect and abandonment has caused serious anxiety and depression. It changed Evan’s entire life, filling a little boy who was full of joy with fear. Connor has problems as well, even though he’s from an intact family (in the original stage show), and the decision to turn him into an abandoned boy as well is interesting, but unnecessary.

Timeline-wise, it also doesn’t make sense, as Zoe tells Evan that she barely has any memories of their father because he left when she was one. Who has memories of anything from when they were less than three years of age? Not only that, but she says that Connor -- who was two when their father left -- does have memories. Their stepfather showed up on the scene when Connor was three, so for him to have any memory of a time when Larry wasn’t around, really isn't believable.

Colton Ryan, who was in the original Broadway cast as an understudy to Evan and Connor and played the roles several times, does an outstanding job as Connor Murphy, and his duet with Ben Platt is one of the funniest numbers in the otherwise mostly serious story.

Nik Dodani as Evan’s “distant relative” Jared brings comedic relief to the show every time he appears, and when he helps Evan write emails ostensibly from Connor, which are then acted out by Ben Platt and Colton Ryan, not only are Dodani’s asides and expressions laugh-out-loud hilarious, but the way Ryan performs these out-of-character actions with glee is hysterical. Just to note, each of these characters had their roles shortened and Connor had a song cut so more time could be given to the character of Alana (Amandla Stenberg), a perky and outgoing girl at school.

In spite of the changes, what makes this movie so compelling is that audiences are witnessing Ben Platt in a role he's very comfortable with, after playing it to perfection for years onstage. Not only do you see each expression and emotion cross his face, each nervous tick and quirk -- some of which may have been missed onstage to audiences at the back of the theater -- but his incredible vocal range, tone, riffs, vibrato and control are unparalleled.

Platt plays Evan’s awkwardness and mental struggles with touching vulnerability, to the point that, even though he finds himself going in a direction he should never have taken, it’s easy to understand that he’s doing it because he’s an inherently kind person — which makes it possible, at least for the audience, to forgive him his shortcomings.

What's also fantastic about film is that every facial expression is now close up, which makes what the characters are going through that much more poignant. The song "If I Could Tell Her," when Evan tells Zoe the things that Connor loved about her becomes even more meaningful as we realize each moment Evan is talking about is really from his vantage point -- the things he loves about Zoe.

Whether you've seen the stage version or not, Dear Evan Hansen is definitely worth seeing on the big screen, even if the filmmakers felt compelled to change the intention somewhat for the movie version. ~Alexandra Heilbron 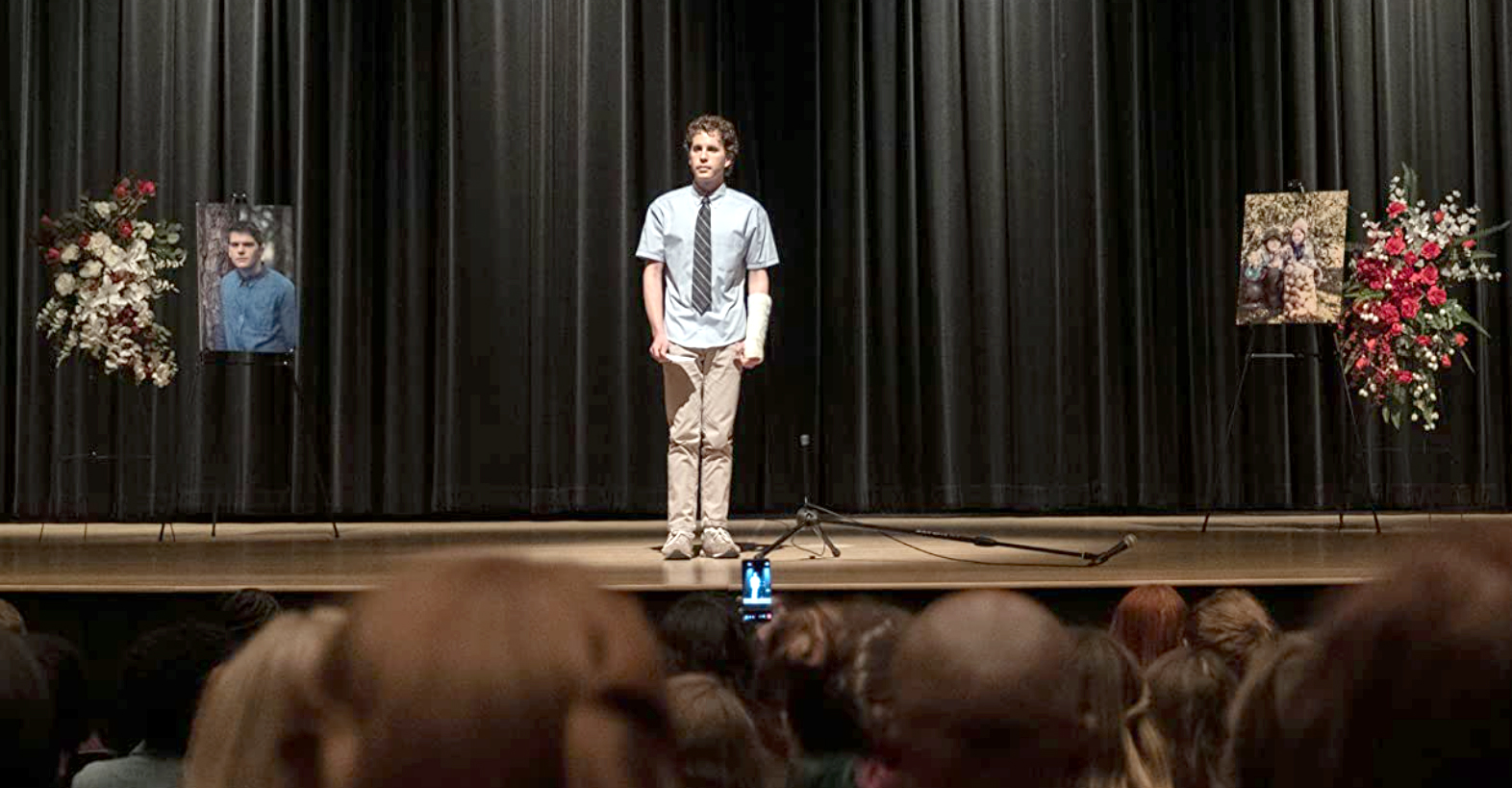