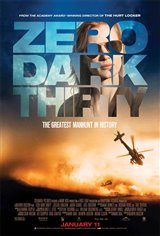 Following the September 11 attacks on the United States, a decade-long hunt began for Osama bin Laden, the head of the Islamist militant group al-Qaeda.

The movie follows the efforts of top secret CIA intelligence forces, who rented a home in Abbottabad, Pakistan near the compound where bin Laden was believed to be in hiding. The official code name of the mission was Operation Neptune Spear and on May 2, 2011, a special force of Navy Seals carried out a raid that brought the terrorist down.