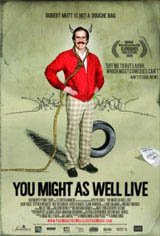 Robert R. Mutt (Joshua Peace) has never had it easy. His family thinks he's a retard, the neighbors think he's a pervo, and almost everyone else thinks he's a total douche bag. He's failed at everything he's ever tried to accomplish, including his own suicide. If that wasn't enough, he's just been kicked out of the only place where he's ever felt at home, the depression ward of the Riverside Mental Hospital... for being too happy.

Despite all this, Robert is determined to prove that he's "a real somebody," and on the advice of his childhood hero (former local baseball hero Clinton Manitoba), he sets out to attain the three keys to success—some money, a girl, and a championship ring. This sets Robert on a madcap adventure involving a drug racket, a roller-skating transvestite, a bar-mitzvah and an air hockey tournament which leads to heartbreak and unexpected triumph.