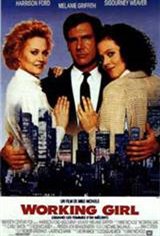 Unhappy with her job and her loser boyfriend, Melanie Griffith takes a secretarial post at a major Wall Street firm. Her boss is Sigourney Weaver, an outwardly affable yuppie whose grinning visage hides a wicked and larcenous propensity for exploiting the ideas of her employees.

While Weaver is incapacitated, Griffith is compelled by circumstances to pose as her boss. Her inborn business acumen and common sense enable Griffith to rise to the top of New York's financial circles, and along the way she wins the love of executive (Harrison Ford).

Things threaten to take a sorry turn when Weaver returns, but it is she who suffers from the consequences of her own past duplicity. Working Girl was Melanie Griffith's breakthrough film, proving than she was more than just the off-and-on significant other of Don Johnson.

The film was later adapted into a brief TV series, starring a pre-Speed Sandra Bullock.