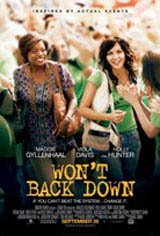 Jamie (Maggie Gyllenhaal), a single mother working as a bartender, is beyond disappointed with her child's failing inner-city school and decides that it's time to take matters in her own hands. She's joined in her fight by Nona Alberts (Viola Davis), a teacher from the opposite side of the tracks. Each of them have their own reasons for joining the cause—Jamie wants to save her daughter's future and Nona needs something to restore her love for teaching and to rebuild her own life.

Despite their stark differences, the two women share in their ultimate goal of overruling school administrators and bringing change to a school that desperately needs to rise above its bottom ranked position. But their fight won't come easy. Together they will put everything on the line to take on a school board that's stuck in inefficient, traditional means of thinking, not to mention a union rep (Holly Hunter) who is not above using questionable methods to stop them.

Based on California's Parent Trigger Law, which was passed in 2010. It allows parents with students in low-performing schools to enact wide-spread reform using petitions.