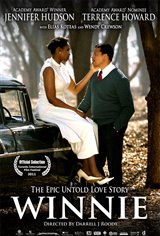 Following the life of Winnie Mandela (Jennifer Hudson) through her then-husband Nelson Mandela's imprisonment, continuous harassment by the security police, banishment to a small Free State town, betrayal by friends and allies, and more than a year in solitary confinement.

Though married to Nelson when he became president of South Africa in 1994, she was never First Lady because they'd separated two years earlier when it was revealed she'd been unfaithful.

Later, she made headlines when she was convicted of the kidnapping of 14-year-old activist James "Stompie" Moeketsi, as well as being an accessory to assault (the boy was found murdered). Despite this and her endorsement of violent practices such as burning people alive, Winnie, who is a qualified social worker, is popular among her supporters, who refer to her as the 'Mother of the Nation.'

A sensitively balanced portrayal that investigates and examines the controversies that dogged Winnie in later years, painting a rich and warm portrait of one of the world's most famous female activists.

Based on the biography by Anne Marie du Preez Bezdrob.