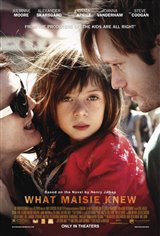 Set in New York City, the story follows a seven-year-old girl named Maisie (Onata Aprile) who is caught in the middle of her parents’ divorce. Her mother, Susanna (Julianne Moore), is an aging rock star and her father, Beale (Steve Coogan), is a contemporary art dealer. What unfolds is the chaos of adult life seen from the eyes of a child.

Adapted from the novel of the same name written by Henry James.