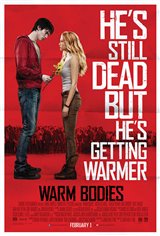 Able to absorb memories from the brains of his victims, teenage zombie R (Nicholas Hoult) finds himself overcome with affection for the girlfriend of one of his victims, Julie (Teresa Palmer), whom he rescues from imminent death at the hands of his cohorts.

An unlikely romance results, but Captain Grigio (John Malkovich), the leader of the human group and Julie’s father, refuses to accept R as anything but a monster, leaving R and Julie to set into motion a chain of events that will transform him, his fellow dead and maybe even the whole lifeless world.