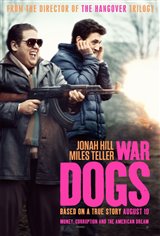 David Packouz (Miles Teller) is struggling to make a living as a massage therapist when he runs into his old friend, Efraim Diveroli (Jonah Hill). Tired of his therapist job, David tries selling linen to retirement homes, but winds up losing thousands of dollars. So when Efraim asks David to join his company in selling arms to the U.S. government, he agrees.

Unfortunately, they discover the task ahead of them is much more difficult than they'd anticipated. Although their first deal makes them a lot of money, in order to pull off another deal, the two become involved in shady dealings when the packaging on ammunition they purchased turns out to be illegal. They come up with a plan to save the deal, but soon find themselves in hot water with the United States government.