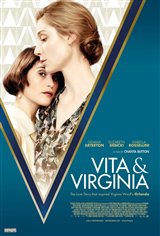 When aristocrat and writer Vita Sackville-West (Gemma Arterton) attends a costume party in Bloomsbury in 1922, she tells her husband, diplomat Sir Harold Nicolson (Rupert Penry-Jones), how eager she is to meet famed author Virginia Woolf (Elizabeth Debicki). Virginia has attended the party with her husband, Leonard Woolf (Peter Ferdinando), her sister Vanessa and Vanessa's gay roommate.

Leonard is aware that Vita is hoping to have an affair with Virginia, and as a man who sleeps with other men, he advises her to be discreet. Virginia is intrigued by Vita when the two women meet. Having gone through a long struggle with mental health 10 years earlier, she's still emotionally fragile. However, her affair with Vita is accepted by her husband, who believes it will keep up her spirits.

Based on Eileen Atkins' 1993 play, which used letters written by the two women as source material.