Vampires vs. the Bronx (Netflix) 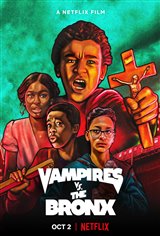 Miguel (Jaden Michael) lives in the Bronx, where he has to maneuver around gang-bangers, pushy priests and a mom who's really tough on him. His fellow residents are being driven out of the city due to rent increases, and businesses are being purchased by white people. As Miguel is trying to get the word out about a block party to raise funds to help save a local corner store run by his friend/father figure Tony, he witnesses his neighbor Slim being killed by a vampire.

Miguel tries to tell the adults in his life, but because they don't believe vampires exist, they don't listen to him. He turns to his two friends, Luis (Gregory Diaz IV) and Bobby (Gerald W. Jones III). However, the kids face a lot of obstacles, including the fact that the vampires know they can get away with murder without attracting attention, because the police don't pay a lot of attention to crimes in a Black neighborhood. Undaunted, the kids discover that Murnau Properties, which has been buying up storefronts to replace businesses with fancy cafes and restaurants, is behind the influx of vampires. Now they just need to find a way to stop the company, which is run by Frank Polidori (Shea Whigham).