Valerian and the City of a Thousand Planets 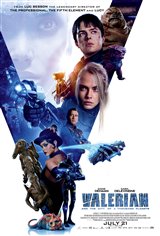 In the 28th century, Government of Human Territories operatives Valerian (Dane DeHaan) and Laureline (Cara Delevingne) are tasked with maintaining order throughout the universe. Under orders from the Minister of Defense (Herbie Hancock), the two have 10 hours to complete a mission to the galactic city of Alpha.

Species from all over the universe have come together over the centuries to share knowledge and cultures with each other. There is a mystery at the centre of Alpha, a dark force that threatens the City of a Thousand Planets. Valerian and Laureline must identify the threat and deal with it if they want to save the universe.