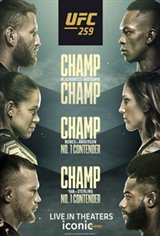 A championship tripleheader will have the entire sports world tuned in for UFC 259 on March 6. In the main event, middleweight champion Israel Adesanya will attempt to make history when he challenges Jan Blachowicz for the light heavyweight title.

With a win, "The Last Stylebender" will become just the fifth fighter in UFC history to hold two divisional titles simultaneously. One of those fighters already in the record books, Amanda Nunes, will defend her featherweight crown against surging Australian contender Megan Anderson in the UFC 259 co-main event.

And opening up this trio of title fights will be a showdown between bantamweight king Petr Yan and number one contender Aljamain Sterling.