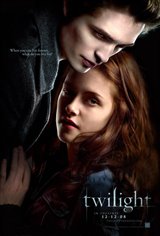 When Bella Swan's (Kristen Stewart) mother gets married to a baseball player, the 17-year-old decides to leave her home in Phoenix to live with her father in the tiny town of Forks, Washington. Forks is a big change for shy, quiet Bella, and she finds the attention from her new classmates unusual, as several of the boys compete for her attention.

But the boy who interests her most is the impossibly good-looking and remote Edward Cullen. She can't understand why he seems repelled by her during their first class together, or why he doesn't return to school for the next several days.

When he does return, Edward seems drawn to her and although he warns Bella it would be in her best interests to avoid him, the two wind up spending more and more time together. Eventually, Bella figures out that there's something different about him and he reveals himself to her, hoping—but also fearing—that his secret will repel her.

When the truth about Edward puts Bella in danger, he realizes that sooner or later, he's going to have to make a decision as to whether or not they should be together.