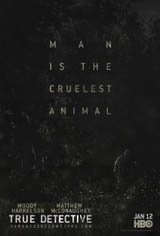 The story begins in 1995, when partnered detectives Rustin "Rust" Cohle (Matthew McConaughey) and Martin Hart (Woody Harrelson) are called to investigate the death of former prostitute Dora Lange, whose naked body has been found in a burning crop field. She's been crowned with deer antlers, tattooed with an unusual symbol, surrounded by Cajun bird traps and set in a kneeling position. Lange becomes the inciting incident for a long and arduous case spanning decades, but Cohle is convinced it's not an isolated incident either.

By 2012, Rust and Cohle are no longer partners. In fact, they haven't spoken in years after a falling out equally as mysterious as the crimes they investigated back in 1995. They are each interviewed separately by the same pair of young detectives, Thomas Papania (Tory Kittles) and Maynard Gilbough (Michael Potts). But this isn't a routine post-mortem report on a case that was supposed to have been closed 17 years prior. There are details of which neither pair of detectives are aware.