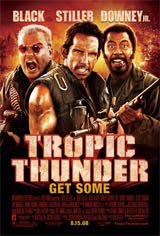 Soon after the production begins the actors are thrown into a real-life situation and are forced to become the fighting unit they're portraying, in order to find a way out of the jungle in one piece.