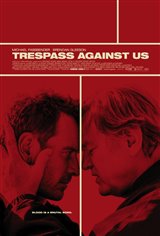 For three generations, the Cutler family has lived as notorious outlaws in some of Britain's wealthiest areas, spending their time hunting, raiding large estates, and causing trouble for the police.

However, Chad Cutler (Michael Fassbender) wants to break away from the outlaw life. He finds himself torn between loyalty for his father's principles, and his dream for a better life for his children — all while the law is finally starting to catch up to him.