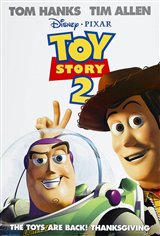 The toys face a new crisis as Andy goes to summer camp. An obsessive toy collector (Wayne Night) snatches Woody (Tom Hanks) who turns out to be a highly valued collectable -- it seems that Woody was the star of a 1950s television show.

It is now up to Buzz Lightyear (Tim Allen) to rally up the rest of the gang (Mr. Potato Head, Rex, Hamm and Slinky Dog) and spring into action to rescue their pal from becoming a museum piece, all before Andy gets home and finds Woody missing.