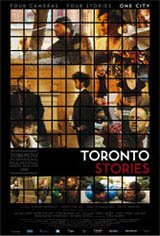 Opening on the chaos and confusion of Pearson International Airport's arrivals lounge, a young immigrant boy arrives in Toronto, alone and not speaking a word of English. Before the authorities have a chance to figure out where he's from, he disappears and an amber alert is issued that reverberates through the city. Meanwhile, the boy finds his way into the center of town, where he bears accidental witness to a covert mission of two kids to find the infamous Cabbagetown Monster, a budding romance, and an escaped ex-con reconnecting with an old friend—all the while managing to remain undiscovered despite the widespread search for him. Finally, a once established man fallen from grace and now inhabiting the streets and alleys around Union Station spots the lost boy, but when he approaches the authorities his mental illness causes the credibility of his discovery to be questioned.