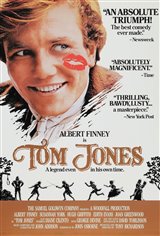 Tony Richardson's adaptation of Henry Fielding's classic novel was one of the most critically acclaimed and popular comedies of its time, winning four Academy Awards, including Best Picture. The film follows Tom Jones (Albert Finney), a country boy who becomes one of the wildest playboys in 18th century England, developing a ravenous taste for women, food, and rowdy adventures. Over the course of the film, Jones tries to amass his own fortune and win the heart of Sophie (Susannah York). Not only does John Osborne's Oscar-winning screenplay stay true to the tone of the novel, but the cast -- including Lynn Redgrave in her first screen role -- tears into the story with spirited abandon, making the movie a wildly entertaining and witty experience.