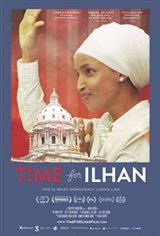 Ilhan Omar, a young, hijab-wearing mother of three, takes on two formidable opponents in a highly-contested race for a seat in the Minnesota State Legislature. If successful, she will become the first Muslim Somali- American woman lawmaker in the United States.

Similar to the classic tale of David and Goliath, Omar, who is up against a 43-year incumbent, is the "outsider"- a Muslim, refugee, woman of color - who seeks to challenge the party's status quo while simultaneously defying the gender norms within her own Muslim community.