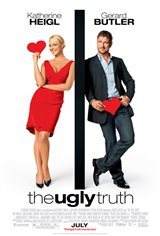 Abby Richter (Katherine Heigl) is an ambitious morning talk show producer on "A.M. Sacramento" who prides herself on being able to find an instant solution to any problem—any problem that is except her own unhappily single status. When it comes to dating, the always-in-control Abby has a flawless track record of failure.

When her show suffers a ratings slump, Abby is forced to team with the newly recruited special correspondent Mike Chadway (Gerard Butler), a man who couldn't push more of her buttons. His "The Ugly Truth" segment promises to spill the beans on what makes men really tick. But his outrageously racy, gleefully chauvinistic, "shock jock" style rubs Abby in all the wrong ways and to make matters worse, becomes an instant ratings bonanza, sealing his network status.

Then Abby meets Colin, her neighbor, and he's a single doctor! He's everything Mike Chadway isn't—suave, polite, not remotely into jello wrestling—and this time, Abby doesn't want to blow it. She hates to admit it, but she needs Mike's insight into the male mind to make the right moves. Now, as Mike coaches Abby and Abby puts Mike's provocative seduction theories to the test, they are both about to discover an ironic truth: as different as we might be, men and women share some of our most secret feelings in common.