The Trial of the Chicago 7 (Netflix) 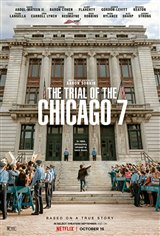 After the assassinations of peaceful revolutionary Martin Luther King Jr. and Bobby Kennedy, who worked on behalf of the civil rights movement, a group of revolutionaries decided to hold a peaceful protest at the 1968 Democratic National Convention in Chicago. However, the demonstration soon took a turn when the police began beating protesters, who retaliated by throwing bottles and rocks. The protests lasted five days and nights and resulted in numerous arrests.

The organizers of the demonstration were called The Chicago Seven, and included Abbie Hoffman (Sacha Baron Cohen), Jerry Rubin (Jeremy Strong), David Dellinger (John Carroll Lynch), Tom Hayden (Eddie Redmayne), Rennie Davis (Alex Sharp), John Froines (Danny Flaherty), and Lee Weiner (Noah Robbins). They were arrested on a number of charges, including crossing state lines to incite a riot. The trial was a colorful one that earned as much publicity for the defendants' antics as for the trial itself.