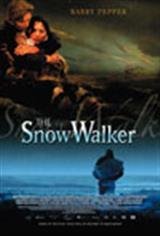 It's the summer of 1953 and bush pilot Charlie Halliday—brash ladies man and war veteran—is flying a routine job in the Queen Maude Gulf on the Arctic Ocean when he encounters a small band of Inuit people who plead for his help. They are traveling with a sick young woman ("... tuberculosis," Halliday thinks) and they want Halliday to fly her to a hospital. At first he refuses, but when they offer him a bribe of two beautiful walrus tusks, he reluctantly agrees.

During the flight, the aircraft's engine suddenly explodes. The plane nose-dives towards certain death before Halliday can pull her up. But it's not enough; a float catches the waves of the glacial lake, hurling the plane high in the air before it comes crashing down only yards from shore. Though miraculously surviving the crash, Halliday is overwhelmed with a sense of doom when he finds they are stranded hundreds of miles from civilization on the rugged and barren arctic tundra with a broken radio and only a handful of supplies. Halliday sees his companion, the enigmatic Kanaalaq, as a savage whose presence is sure to be a burden. With winter fast approaching, he realizes they will both surely perish.