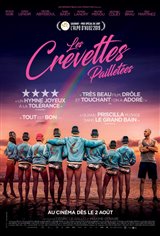 Mathias Le Goff, the second-highest ranked swimmer in the world, gets angry with a journalist and utters a homophobic slur live on television. Sanctioned by his federation, the athlete must give up his career for a while to train the "Glitter Shrimp," a gay water polo team. But the happy group is more likely to party than to excel in the pool. Although the flamboyant personality of his players is the opposite of his, Mathias gradually takes his role of coach to heart, while the date of the next Gay Games is fast approaching.