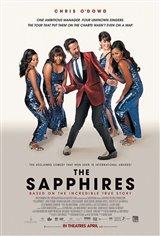 Laurel Robinson, Lois Peeler, Beverly Briggs and Naomi Mayers were born in Australia, along the Maury River. They grew up in a family that revolved around music and could often be seen singing at their local church.

Sisters Laurel and Lois shared a passion for music with their cousins Beverly and Naomi. The four women joined forces to create the all-girl singing group whose beautiful vocals and experiences inspired a musical and film—The Sapphires.

The young women would entertain crowds at the local club Tiki Village, located in St. Kilda, Australia. In an interview with The Sydney Morning Herald Laurel Robinson said, "We’d sing Thursday, Friday and Saturday. We loved it so much and they loved our harmonies."

In 1968, their soulful harmonies caught the attention of the club's band, and they offered the group an opportunity of a lifetime—to sing for the American Troops. Laurel and Lois jumped at the opportunity, while their cousins decided to stay behind. Naomi later admitted her reluctance to travel to the front was because she didn’t support the war and was protesting.

After saying goodbye to their cousins, the two sisters traveled to Vietnam to offer a musical escape for the soldiers during their long days at the war front.

Today Naomi, Laurel and Beverly work to better the health care system for aboriginal people, while Peeler is the executive director of Worawa Aboriginal College. All still reside in Australia.