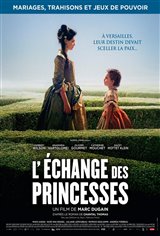 Europe, 1721. After years of a disastrous war between France and Spain, the Regent Philippe of Orleans agrees with King Philippe V to put an end to hostilities.

The exchange completed, the two future wives acclimate differently to their new status. As soon as she is married, the rebel Louise-Élisabeth clashes with the future Spanish king and her in-laws. As for the innocent Marie Anne, she finds comfort with the former governess of Louis XV.