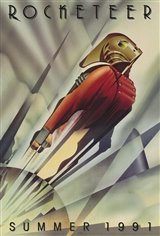 After getting his start as a visual effects artist on the original Star Wars trilogy, Spielberg protegé Joe Johnston found success as a director with his debut film, the blockbuster family adventure Honey, I Shrunk the Kids. For his sophomore outing, Johnston helmed this action-adventurer, set in 1930s Hollywood and in the spirit of old pulp comics and adventure serials, and co-adapted from the David Stevens graphic novel by Danny Bilson and Paul De Meo.

Billy Campbell stars as Cliff Secord, an eager young pilot who finds himself in possession of a secret jet-pack that gives him the ability to fly. Cliff soon learns that screen-star Neville Sinclair (Timothy Dalton) will stop at nothing to get his hands on the rocket pack so he can give it to the Nazis. As The Rocketeer and with a little help from his mechanic friend played by Alan Arkin, it's up to Cliff to elude Sinclair, defeat the Nazis, and save his girlfriend Jenny (Jennifer Connelly).