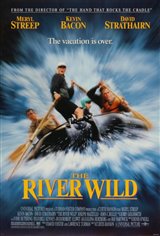 In a change-of-pace role designed to prove that she could carry high-concept genre films as well as character-driven dramas, Meryl Streep headlined this fast-paced adventure as Gail, a whitewater rafting guide. For a vacation, Gail is accompanying her son Roarke (Joseph Mazzello) and workaholic husband Tom (David Strathairn) on a river trip.

Gail and Tom are experiencing marital troubles and contemplating divorce, but their problems take a back seat when they encounter some menacing rafters led by Wade (Kevin Bacon). After Tom saves Wade from drowning, they discover that the men are murderous fugitives using the river as an escape route.

Kidnapped by the killers, Gail's forced to leave her husband stranded on shore and guide the villains through the Gauntlet, a raging confluence of rivers that few rafters ever survive. Meanwhile, Tom proves to be wilier than anyone suspected, following the raft on foot and plotting his family's rescue.

Following a quartet of popular B-grade thrillers, director Curtis Hanson attempted to break partially out of the genre with The River Wild, which, despite the presence of a psycho killer, played as more a stunt-filled action movie than a murder mystery.