The Prince Of Egypt 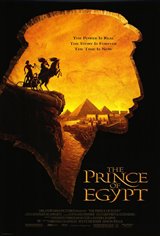 This was the first film that the newly-formed DreamWorks SKG studio -- owned by Steven Spielberg, Jeffrey Katzenberg and David Geffen -- said they were committed to making.

It's a musical adaptation of the story of Moses and the whole Ten Commandments on the stone tablet thing -- which, by the way, you can think of like a test, and if you get 8 out of 10 right, you're doing pretty good.