The Other One (Acorn TV) 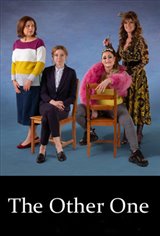 For 28-year-old Cathy Walcott (Ellie White), her life is turned upside down when she learns that her recently-deceased father, Colin (Simon Greenall), had a secret love child. Her half-sister, Cat (Lauren Socha), is only five days younger and has the same birth name, Catherine Walcott. She lives just 13 miles away in a neighboring town. Both Catherines have always wanted a sister, but they have very little in common: Cathy has a fiancé and a pension and is a successful, yet uptight, re-insurance agent, while outgoing and bubbly Cat is a single food delivery truck driver. Yet they forge a friendship during this difficult time.

Their mothers are just as opposite — though they have an equally rough time adjusting to a new normal. Wife Tess Walcott (Rebecca Front) vents about her husband's philandering during her eulogy at his funeral and is eager to burn all of his possessions, although eventually she struggles to move on by using dating apps and taking an exercise class. Colin's longtime mistress of 30 years, Marilyn (Siobhan Finneran), is more eccentric and mellow, yet is outspoken about her feelings and very comfortable in her former role in Colin's life.