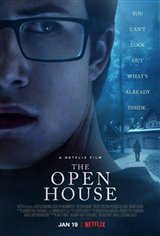 After his father dies, Logan Wallace (Dylan Minnette) and his mother Naomi (Piercey Dalton) temporarily move to a relative's vacant house in the mountains, which is up for sale. They have to leave on Sundays so the real estate agent can hold an open house.

However, they soon find strange things occuring as they hear unexplained noises in the house and see inexplicable occurrences.