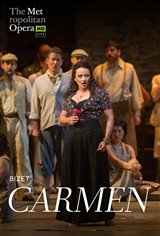 This classic opera, sung in French, stars mezzo-soprano Clémentine Margaine as she reprises her portrayal of opera’s ultimate seductress, Carmen. Tenor Roberto Alagna plays the role of her lover, Don José, the good-hearted soldier in whom she unleashes an uncontrollable passion.

Don José breaks the law, goes to prison, deserts the army and loses everything to be with Carmen. But the capricious gypsy soon tires of him and takes up instead with the bullfighter Escamillo (Alexander Vinogradov). She has ruined his life, but Don José still adores her with a fierceness that can only lead to catastrophe.