The Lord of the Rings: The Two Towers - 4K Remaster 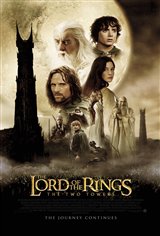 Set in a time of uncertainty in the land of Middle-earth, a tale which charts a heroic quest, which centers around an intrepid hobbit. The future of civilization rests in the fate of the One Ring, which has been lost for centuries. Powerful forces are unrelenting in their search for it. But fate has placed it in the hands of a young Hobbit named Frodo Baggins, who inherits the Ring and steps into legend. A daunting task lies ahead for Frodo when he becomes the Ringbearer as his assigned duty is to destroy the One Ring in the fires of Mount Doom where it was forged. But he can't accomplish this task alone. A Fellowship bands together to lend Frodo all that he needs to carry out his mission: the wisdom of Gandalf; the loyalty of his friends Sam, Merry, and Pippin; the courage of Aragorn and Boromir; the precision of Legolas; and the strength of Gimli. They are aided in their quest by Arwen, Galadriel and Elrond, whose knowledge of the Ring brings to light the true danger and importance of their journey.