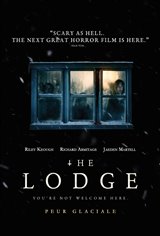 When Richard (Richard Armitage) takes his children, Aidan (Jaeden Martell) and Mia (Lia McHugh) to his remote winter cabin over the holidays, he's hoping they'll take a liking to his new girlfriend, Grace (Riley Keough), who's also along for the trip.

The kids, who don't like Grace because they blame her for their mother's (Alicia Silverstone) death, discover she has a dark past as the sole survivor of a mass suicide/murder. Not only that, but they find out their father knows all about what happened. However, Grace seems to have gotten over her horrific past, although she still takes meds to help her cope.

When Richard is forced to abruptly depart for work, he reluctantly leaves the three alone together. One morning, they wake to find they have no heat or electricity and their cell phones don't work. They can't get out because of a blizzard and Grace begins acting strangely—possibly because she ran out of pills—or because the children, who don't try to hide their hatred for her, are driving her mad.