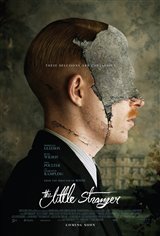 In 1949, Dr. Faraday (Domhnall Gleeson), a country doctor, is called to see a patient at Hundreds Hall, an 18th-century estate. He remembers his first visit to the grand estate in 1919, when he was a child, attending a fair that was taking place on the grounds.

The Hall has been home to the Ayres family for more than two centuries, but he's surprised to see how rundown it has become in the past 30 years. Mrs. Ayres (Charlotte Rampling) still lives there with her son Roderick (Will Poulter), who's suffering both physically and mentally from his experiences as a pilot during WWII, and her daughter, Caroline (Ruth Wilson), who was summoned home to nurse Roderick.

Faraday has been called to examine Roderick, but soon discovers that the family has secrets relating to the eldest Ayres child, Susan, who died at the age of eight, before Caroline was born. Roderick asserts that there's something evil in the house, but Faraday believes he's having delusions that seem to be contagious.