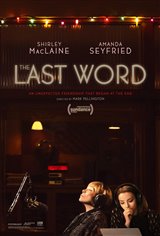 A high-handed, retired businesswoman named Harriet (Shirley MacLaine) decides to get someone to write her obituary before she dies, to make sure her life story is told on her own terms.

A young journalist named Anne Sherman (Amanda Seyfried) is tasked with writing Harriet’s obituary, and decides to investigate the truth behind the woman's story. When Anne is given a list of people to gather quotes from about Harriet, it becomes clear that she's not well-liked amongst her peers. In spite of Harriet's domineering attitude, the two eventually establish a friendship of sorts.