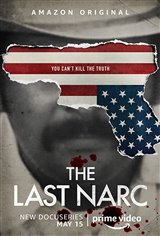 The Last Narc is a four-episode documentary series that tells the true story of what happened to DEA Agent "Kiki" Camarena, who went undercover in the 1980s to try to take down the Mexican cartel.

Special agent Hector Berrellez was tasked with finding out what happened to Camarena, from the time he was picked up to the time he died. The documentary shows interviews with Camarena’s widow, and three cartel insiders who helped Berrellez find out the shocking truth behind Camarena’s torture and murder.