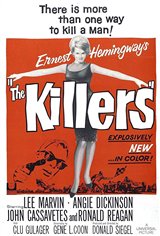 Don Siegel directed this intensely pessimistic re-make of Robert Siodmak's 1946 film noir masterpiece The Killers, based upon a story by Ernest Hemingway.

As the story opens two professional looking men in business suits -- Charlie (Lee Marvin) and Lee (Clu Gulager) -- push their way into a school for the blind and terrorize a secretary until she reveals the whereabouts of Johnny North (John Cassavetes).

When Charlie and Lee trace Johnny to an automobile repair class, Johnny just stands there as the two men gun him down. Afterwards, Charlie wonders why Johnny just stood there, accepting his death. He also starts to wonder about his hefty paycheck for the murder and rumors that Johnny was involved in a million-dollar heist.

He decides to pay Johnny's old friend Earl Sylvester (Claude Akins) a visit at his auto shop in Florida. Earl recalls the summer day long ago when former race car driver Johnny caught the eye of the rich and beautiful Sheila Farr (Angie Dickinson). Johnny has been preparing for a race, but Sheila's attentions sidetrack him.

The day of the big race, Earl notices that Sheila is visited by a group of rich gangsters, headed by Browning (Ronald Reagan, in a very surprising performance). During the race, Johnny is involved in a terrible crash, effectively ending his racing career. However, it seems Browning is arranging a mail heist and hires Johnny to drive the getaway car.