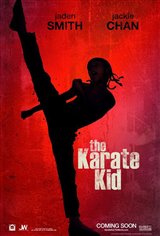 12-year-old Dre Parker (Jaden Smith) could have been the most popular kid in Detroit, but his mother's (Taraji P. Henson) career takes them both to China. Dre has a hard time making friends at first but he does make a connection with his classmate Mei Ying—and the feeling is mutual—until cultural differences make such a friendship impossible. Even worse, Dre makes an enemy of the class bully, Cheng. Dre knows only a little karate, and in the land of kung fu, Cheng puts "the karate kid" on the floor with ease. Feeling alone in a foreign land, Dre has no friends to turn to except the maintenance man, Mr. Han (Jackie Chan). Secretly a master of kung fu, Mr. Han and Dre begin to train together, building a friendship and moving toward a final showdown with Cheng at a kung fu tournament. As Han teaches Dre that kung fu is not about punches and parries, but maturity and calm, Dre learns that facing down the bullies will be the fight of his life.