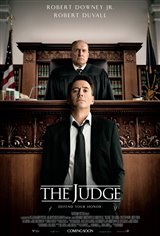 Successful big city lawyer Hank Palmer (Robert Downey Jr.) reluctantly returns to his hometown for his mother's funeral, even though he's been estranged from his father (Robert Duvall), esteemed Judge Joseph Palmer, for years. Following the funeral, he discovers his father is suspected of murdering a former defendant whom he failed to convict, and who went on to commit a horrific crime.

Despite his father's initial rejection when Hank offers to help with his defense, Hank sets out to discover the truth. Along the way, he discovers why his father never seemed to be happy with him in his younger years and what it was that drove them apart.