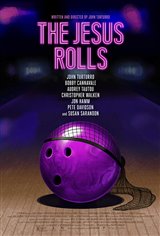 Although he's on parole, Jesus falls into his old ways, stealing cars and other items of interest. Along the way, they pick up free-spirited hairdresser Marie (Audrey Tautou) and embark on an epic petty crime spree across the rural backroads of New York. Later, when Marie moves on, they pick up an older woman, Jean (Susan Sarandon), when she's released from prison. Taking in the idyllic landscapes from the window of a stolen muscle car, the trio spend their days occupied with free love and the pursuit of happiness, and doing whatever it takes to get by.