The Jack in the Box 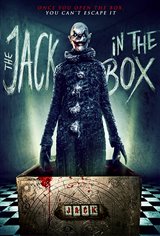 American Casey Reynolds (Ethan Taylor), a museum and history enthusiast, shows up for his first day of work at a small museum in the British village of Hawthorn. He meets his co-worker Lisa (Lucy-Jane Quinlan), who has lived in the village all her life. Featured in the museum is a toy exhibit where Casey discovers a large antique Jack in the Box, which has recently been unearthed.

After Casey opens the box, his colleagues begin dying one by one and he fears the toy may be responsible. He learns from a local policeman that there's evidence that suggests Jack in the Box toys originated in France to contain evil entities. As the body count rises, Casey has to work fast to protect others from the terrifying clown with razor sharp teeth.