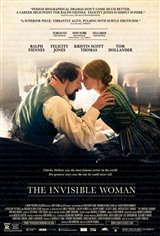 In 1885 the newly reinvented Nelly (Felicity Jones) is a happily married mother and school teacher. Yet, she’s haunted by the past. At 18, she met Charles Dickens (Ralph Fiennes), then 45 and at the height of his career. Nelly was a budding actress who had appeared in a play he’d adapted – and the two embarked on a relationship that had to be kept secret, given that he was married with 10 children.

Based on Claire Tomalin's nonfiction book The Invisible Woman: The Story of Nelly Ternan and Charles Dickens.